What drives the price of gold?

How bond yields, inflation and the $ impact the price of gold

Before discussing why, whether, and how to go for gold, it’s important to take a step back and understand what drives price changes in the first place. From a broad macroeconomic perspective, there are three key factors: the “real” yield on government bonds, US dollar strength, and overall investor sentiment.

Let’s start with real yield. This is quite simply the return available to investors in government bonds (also called the “nominal” yield) minus the rate of inflation. As shown below, the gold price has an inverse relationship to real yield; when the real yield falls, gold tends to rise. 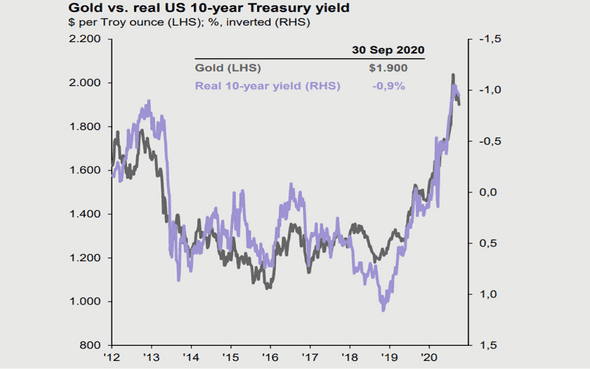 Source: JPMorgan Chase. Keep in mind that past performance is not a guarantee of future returns.


This relationship makes sense once you take a closer look at the two things that determine real yield: government bond yields and inflation. If nominal yields rise, then the “opportunity cost” of owning gold instead of bonds increases; gold, after all, generates no income. Gold, therefore, looks less attractive when bonds offer better returns, causing its price to fall. 📉

But when inflation is rising, the opposite is true. Since government-issued currencies – as well as bonds’ future payouts – are worth less when goods and services grow more expensive, investors are drawn in such scenarios to gold’s stability, underpinned by its limited supply.

The second key determinant of the price of gold is the value of the US dollar. Like most internationally traded commodities, gold’s price is quoted in dollars. If the dollar weakens compared to other currencies, gold becomes cheaper to buy overseas – increasing international demand and pushing up the metal’s price.

A declining dollar 💵 has the added effect of encouraging American investors to seek out stores of value – another source of increased demand (and therefore prices) for gold.

While this inverse relationship generally holds true, it’s important to recognise that there can be periods where both the dollar and gold strengthen simultaneously. That’s because the US dollar, along with the Japanese yen and Swiss franc, is considered a “safe-haven” investment – one which holds up well in times of financial or economic crisis.

Since the same is true of gold, global uncertainty can cause a “flight to safety” in which both it and the aforementioned currencies see prices rise in tandem.


Gold as a safe haven

The perception of gold as a safe-haven ☂️ asset brings us to the third and final driver of its price: overall investor sentiment. During periods of economic and/or geopolitical volatility, such investments are understandably in demand. Also, gold’s status as a physical commodity that can’t be printed like money makes it particularly popular if people are losing faith in the banking system.

This phenomenon also helps explain the birth and rise of cryptocurrencies such as bitcoin which operate independently of national authorities. Of course, such a source of demand is likely to fall when times aren’t so tough – and with it part of the support for gold prices.

Keep in mind that when you invest, your capital is at risk. This learning guide is for information purposes only and is not intended as investment advice.