How to spread your risk

Some examples of balanced portfolios

There is a whole range of assets that you can put in your investment basket. The most famous are stocks, or equities: shares of the ownership of a company.

You’ve also got bonds – the debt of a government or company – foreign currencies, commodities (things like gold or oil 🛢 ) and even real estate like your house or an office building.

Different forces drive the price of these assets, which – as we found out in Chapter 1 – is a good thing for us investors.

For example, stocks are closely linked to company profits, so they tend to gain when the economy is rosy, people are spending freely, and corporations are making money.

Bonds, meanwhile, pay a fixed return, so they do well in periods of low inflation (higher inflation erodes the value of their fixed payments) – and bonds of wealthy governments – like the US or Germany – are a favourite of investors in periods of risk, because they’re much safer than stocks. ☔

US government bonds have returned an average of 5-6% a year over the past century.

Then there’s gold. Unlike bonds, gold usually climbs when inflation spikes, because it’s considered a physical, fixed store of value. When inflation causes investors to lose faith in the value of traditional currencies like the dollar or the euro, they’ll head to the safety of the gold stuff. 🆘


There’s no one definitive way to spread your investments across these assets: it’s always going to be a trade-off between potential gains and potential losses. But to give you some ideas and inspiration, let’s compare a few portfolios recommended by notable investors:


The permanent portfolio by Harry Browne

First off, an investment advisor named Harry Browne devised what he called the “permanent portfolio”. This splits your pot into four and allocates an equal amount to stocks, long-dated US government bonds, gold, and cash.

This fairly conservative strategy aims to provide reasonable gains no matter what the economy is doing. A study assessing the strategy over the 40 years through 2013 found that it gained almost 9% a year.


The no brainer portfolio by William Bernstein

Next up, let’s look at a portfolio created by William Bernstein. This also splits your money into four equal pots but consists of 25% big US stocks, 25% smaller US stocks, 25% non-US stocks, and 25% bonds.

This is a more aggressive 🏎️ approach – its bigger reliance on shares gives it greater potential for both gains and losses. It grew by an average of 10.5% a year over the 40 years through 2013. On the face of it, Bernstein’s portfolio has done better than Browne’s – which only gained 9%, remember.

However, at one point, Bernstein’s selection fell a shocking 43% – which would have felt very painful. 😲 The worst peak-to-trough drop for Browne’s “permanent portfolio” was just 13%. Much less traumatic.

There are basically limitless ways you can tinker splitting your money across different investments.

To give you another example, the managers of the giant endowment funds of the top American universities – Harvard, Stanford, and Yale – have given their assets roughly this split on average: 35% US stocks, 28% bonds, 15% non-US stocks, 11% commodities, and 11% real estate.

To be sure, some people think all this tinkering is unnecessary. Famed investor Warren Buffett has reportedly kept things simple when it comes to the advice given to those overseeing a trust set up for his wife in his will: invest 90% of the money in big US stocks and 10% in short-term US government bonds.

The best approach for you depends on your risk tolerance ⚖️ – which itself will depend on how long you want to keep investing your money. If you’re building up a down payment to buy a house in five years, you probably want to keep things more conservative than if you’re in your 20s not planning to touch your stash until retirement. ⏳

A rule of thumb used by lots of investors is: hold more risky investments (like stocks) while young and gradually allocate more to conservative assets (like government bonds) over time.

In Chapter 3, we’ll show you how to measure how well your portfolio is doing. 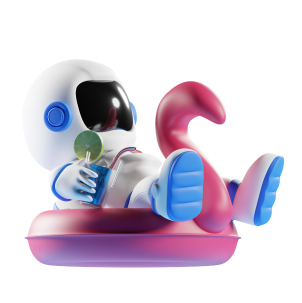